Week Three: YOLLO — You only leave London once

That’s one thing the schedule had listed for the second day of my literature program’s trip to England’s Lake District. Exciting, right? Naturally, the 11 of us who traveled seven hours for a weekend journey met this vague, perhaps cryptic, label with much speculation: “In what sense is the word ‘romantic’ being used here?” “Is our cognizance of the task at hand going to compromise the chance for actual inspiration?” “Seriously? All you can tell us is ‘Walk?’” And because I’ve always been sardonically cynical when it comes to having an appreciation for nature, I figured at best we’d be strolling through dense woodland where every low-hanging branch smacks me (but none of my shorter companions) in the eyeball and mud ruins my shoes. I was wrong.

Well, my shoes did get totally wrecked, but check these pics out.

We climbed a friggin’ mountain! Or half of a smaller peak of a small mountain range I guess — something like that. But it was unreal. We first stopped in a valley that had a literal million goats, as well as some cows and horses, but mostly goats. After the initial astonishment brought on by the mass of goats faded ever so gradually, we began to realize that, “hey, those mountains and plains over there are pretty damn incredible too.” The sheer verticality of the terrain was stunning, and I was undoubtedly inspired. Romantically? Maybe not. But I’ll certainly be less of a skeptical, dismissive douche next time someone tells me how refreshing it is to spend time at a secluded pond or to hike through a forest.

We traveled to the Lake District with the primary goal of visiting both the Bronte Village and the Wordsworth Village. (You know, since we English majors are all about reading books.) The Brontes came first as we arrived in the village of Haworth on Friday. Our tour guide was knowledgeable, although everyone in the group was rather skeptical of his anti-social behavior and accused him of perhaps being untruthful at points. I didn’t care much, because he gave me enough information to make the caption on the following picture historically flippant. 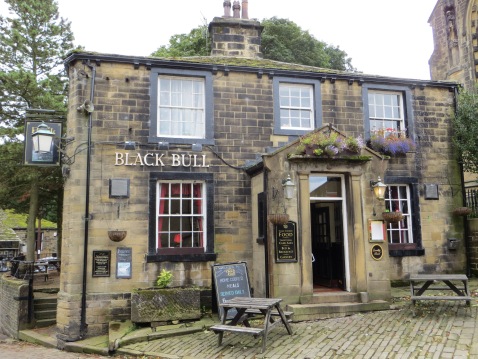 This is the pub where Branwell Bronte used to get hammered!

The village was comfortingly archaic with several artisanal tea and coffee shops lining its single slim cobblestone road. We even got to visit the Bronte Parsonage, where I acquired a new Facebook profile pic of myself in front of a statue of the three sisters. Because that’s what matters.

The Wordsworth Village consists of the late poet’s old home at Dove Cottage, as well as the neighboring few buildings and terrain. Located in Grasmere, this destination was slightly less old-timey, but equally fun to explore. The shops and restaurants were cozy and inviting. The Cottage itself was fascinating, as it maintained subtle structural evidence of specific events that involved Wordsworth’s family and friends. Many of which were caused by what I assume were the electric-koolaid-opium-tests of yore.

Once all the learning and exploring was done, we went out on the town (village) to get inebriated in the same manner and locations as some of the English language’s most esteemed literary minds. We instantly gave up on this effort when we found karaoke, and instead belted Lady Gaga and Florence and the Machine while a bunch of leering locals wondered whether this group of dishy yoofs was from uni or simply on ‘oliday.

Tweets from a different continent!